Thank you to Marcia at The Printed Page for putting on the weekly Mailbox Monday, a place where I discover so many wonderful new books.

Check out her blog and post all the new books you acquired last week.

This Is Not The Story You Think It Is: A Season of Unlikely Happiness

by Laura Munson (ARC from Putnam Books via Shelf 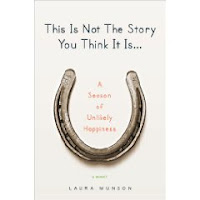 When Laura Munson's essay was published, The New York Times was so flooded with responses that they had to close down the comment feature. Readers wrote in saying that they had sent the column to all of their friends. Therapists wrote Munson to tell her that they were passing it out to their clients.

What did Munson write that caused such a fervor?

Laura detailed what happened when her husband of more than twenty years told her he wasn't sure he loved her anymore and wanted to move out. And while you might think you know where this story is going, this isn't the story you think it is. Laura's response to her husband: I don't buy it.

In this poignant, wise, and often funny memoir, Munson recounts a period of months in which her faith in herself-and her marriage-was put to the test. Shaken to the core after the death of her beloved father, not finding the professional success that she had hoped for, and after countless hours of therapy, Laura finally, at age forty, realized she had to stop basing her happiness on things outside her control and commit herself to an "End of Suffering." This Is Not The Story You Think It Is... chronicles a woman coming to terms with the myths we tell ourselves-and others-about our life and realizing that ultimately happiness is completely within our control.
Posted by Jess - A Book Hoarder at 6:47 AM

She had an interesting response to her husband. This sounds good! Happy reading!

Will have to check out your thoughts when you get to this one. I'm not normally a non-fic reader but memoirs and other narrative style non-fic will occasionally grab my interest.

This sounds so good I've added it to my list. Thanks!

Brooke from The Bluestocking Guide said...

I got this book too!

Your book look great; hope u enjoy it!