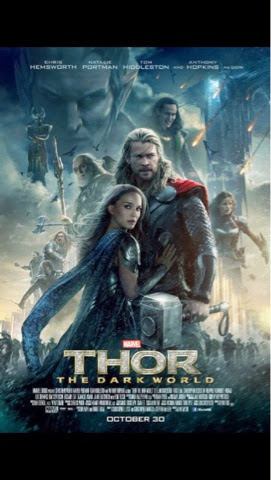 I went to see the new Thor with the boys I work with (hereafter referred to as "my boys") and I found it enjoyable enough. It put me in the mood to watch more of the Marvel Comics movies, especially Iron Man 3 which I had heard great things about.


So...I finally just watched Iron Man 3 and it started off a bit rocky for me because out of the Marvel comics I have only seen Iron Man and Thor so about 20 min in I switched to Netflix and started watching Avegers to try to fill in some of the gaps. Then I decided what I really wanted to watch was Iron Man so I switched back. When it was over, I switched back but started to fall asleep so I gave up for the time being.

Here's the thing...I think I just have to accept that I'm not a full marvel comics fan. I mean Iron Man I can get behind. It's funny and he's got his money and gadgets and Pepper. I get it and I enjoy it.  Thor....well he's hot. Enough said. But he's also got Jane and her hilarious friend Darcy. Plus, not that I would ever admit this to anyone but my closest friends (and the World Wide Web apparently) I'm kinda into Loki.

So Iron Man and Thor I accept. But then you have The Hulk. He's big and green and likes smashing stuff. While green is my favorite color, I just don't care. And Captain America. Oh Captain America, you are such a bore I almost feel sorry for you.  Seriously. I have given you chances. I have watched the beginning and middle (oddly, not in that order) with my boys and I just find him a big fat snoozer.

So for the time being I'll be keeping up with Thor but that's it. Well and Loki, obviously, but they go hand in hand.

Labels: This is not a movie review

I wanted to leave a long response about how Captain America is a hard sell because he's a golden age hero and provide a detailed analysis of his character but then I realized that I need to get back to work and that you probably don't care.

I should have known you would comment with real comic knowledge and wisdom. I should have just turned to you the moment I had any questions. I am curious about this detailed analysis though.

Give ol' Cap a chance. He's easy to write off as a relic of a bygone era and patriotic garbage BUT the Marvel movie-verse has done an admirable job making him a much more three dimensional hero (and that he isn't simply patriotic garbage). He hasn't had much screen time compared to Thor and Iron Man to flesh out his character arc. You can wiki the first movie for Cap but give the Avengers and The Winter Soldier a shot(that's his next movie).

Captain America bores me too, although with that being said, I enjoyed his movie more than I expected to (still not a lot). I'm curious to see what they do in the second film -- I'm excited that Natasha Romanov seems to play a major role in it, for one thing, and I like that the movie seems to be trying a sort of new kind of direction for a superhero movie. We'll see. Because yeah, generally, that guy I can live without.

The Hulk, eh. He's like Ant Man for me -- very lame as a superhero, very fun to watch him when he's Doing Science. I was pleased that Bruce Banner got called in for Science reasons during the Avengers movie, rather than for Hulk reasons.