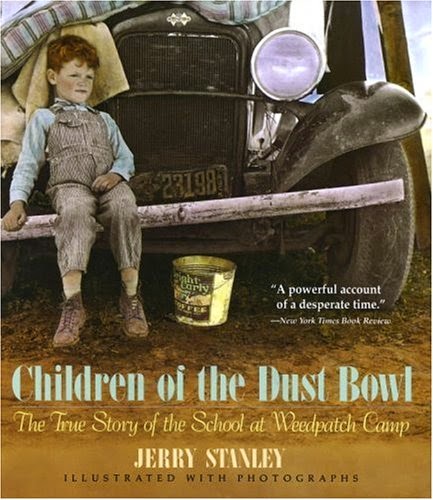 Children of the Dust Bowl: The True Story of the School at Weedpatch Camp
by Jerry Stanley

I was browsing my library's downloadable audiobook site when I  came across Children of the Dust Bowl and decided it would be a good audiobook to kick off Nonfiction November. To be honest, I was drawn to it partly because it was so short (only 1.5 hours or so) and it seemed like it might be something I could listen to when I only had 15 minutes here or there but still have time to actually finish the story.

The other reason I was instantly drawn to it was that I have a deep fascination with the Dust Bowl that is usually hidden deep with my memories of reading Grapes of Wrath in school. There was something about that book that stuck with me. I remember the brief scene that talks about Tom Joad (I think that's who it was) driving the car and how he basically became one with the stick shift and clutch because every bump and clink could lead to their demise. I have this image in my head that I don't think has changed since the moment I read it.

Children of the Dust Bowl gives a little snippet of the life of "Okies" but really gets to the heart of what the kids must have been going through. Constantly picked on in school, the kids found strength in each other. They often had little or no food due to the lack of job opportunities for their parents. Then Leo Hart decided to build them a school, and teach them useful things, and care for them. They all worked together and built a pool. It was the first public pool in Kern County. That's crazy!

This book was tiny but packed an emotional punch. It made me, at times, ashamed to live in a state that could treat people so terribly, with such little care. There were happy moments too though, and they reminded me that there are people who show compassion for no other reason than because it is the right thing to do.

I didn't realize it was categorized as a children's book but now the length makes more sense. I think I may have to find the actual book because there are pictures in it that I just didn't get to enjoy from the audiobook.

This might be a good one to go along with Timothy Egan's The Worst Hard Time. As I want to read Egan's book, I will put this one on my list as well. Thanks for the recommendation.

Leslie @ This is the Refrain said...

Sounds like a really interesting read, and a great introduction to the topic. I've really not read anything on the period.

There was a documentary aired on our local ABC last year about the Dust Bowl era. I think it was a PBS show.
It was fascinating and sounds like it would complement this book beautifully.