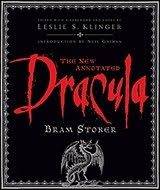 Just in time for Halloween, I finished Dracula.

Last year I decided that it was about time I read Dracula. I had seen Leslie Klinger's The New Annotated Dracula and knew this was the version that I had to own. It was not before long that I realized this was the wrong version for my first time Dracula read. Don't get me wrong, I LOVE all of the information but the annotations were so lengthy and drew me in (cue: me flipping through the pages to read a note that was referenced 3 chapters earlier) it was going to take me 3 times as long to get through the book. I finally had to ignore most of the notes, knowing that I would be able to read them later.

My favorite part of the book would have to be the beginning, when Jonathan is at Dracula's castle. The descriptions are great, with just enough creepiness to get my heart pumping. I am ashamed to say that I was totally in the dark about how the book ended. I did not know what happened to Dracula, I actually thought the exact opposite happened. It was a surprising revelation as well as a fun one. It is nice (and a bit pathetic) to be surprised by the end of a classic.

I found it interesting that Dracula's connection with Mina reminded me of Voldemort and Harry Potter. The marks on the forehead and the mental connections that they had were similar enough that I began to wonder if J.K. Rowling had any inspiration from Dracula while writing HP.

I am so glad I can finally say that I have read Dracula. It was an interesting story that I waited way too long to finally read. Now that I have finished, I am excited the next Halloween I will dive in again. I wonder what kind of details I missed the first time around.
Posted by Jess - A Book Hoarder at 11:00 PM