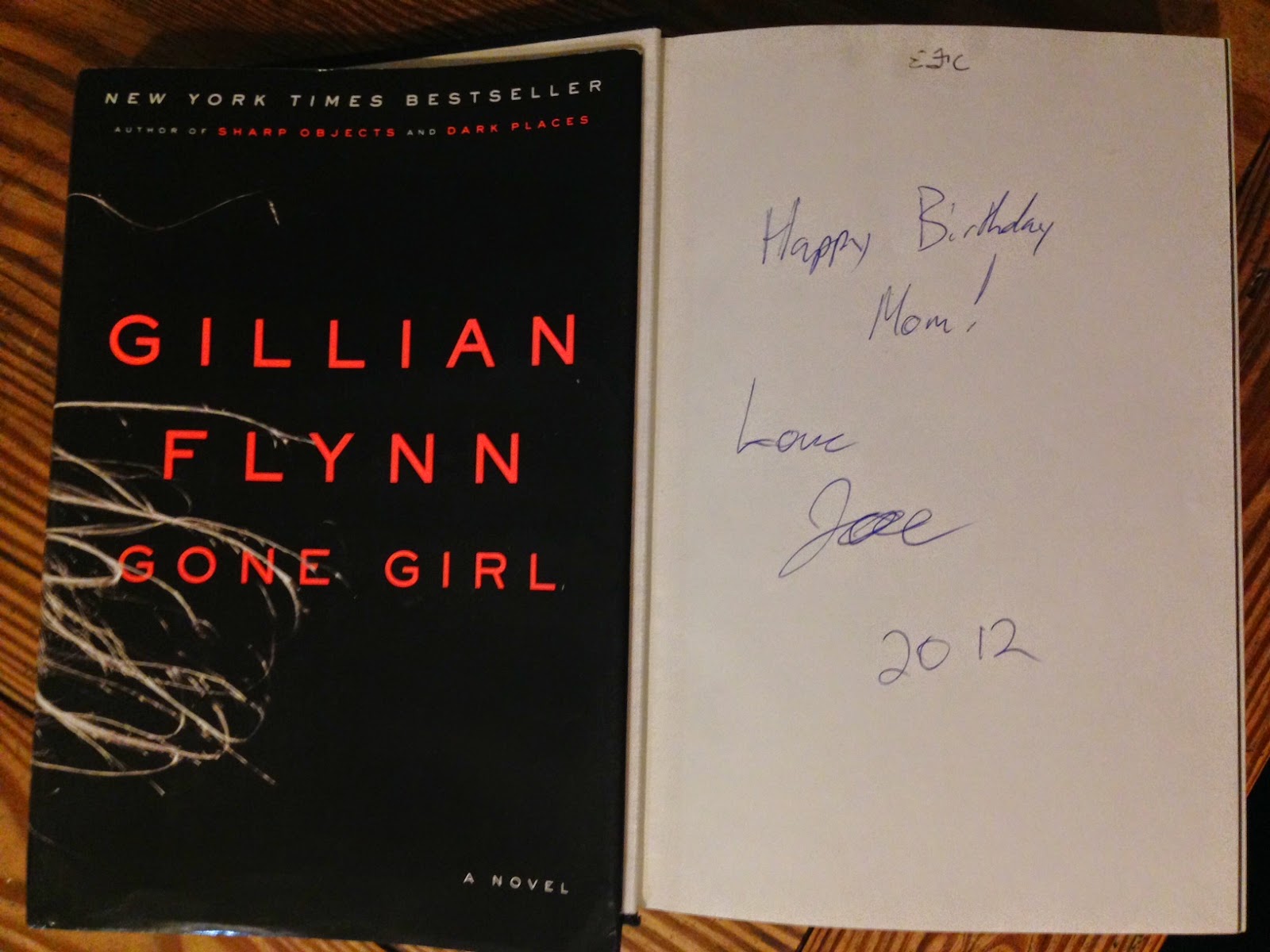 What can I say about Gone Girl that hasn't already been said? Actually I'm not sure about the answer to that because I have done quite a good job of keeping away from all spoilery type things without even trying. I wasn't even sure I was going to read the book until this month. At some point I saw a lonely copy on my library's sale cart and picked it up for $2 (finding an inscription that made me smile). So, the movie came out and Shannon at River City Reading posted this post which I allowed myself to read the first paragraph and then tucked it away until I had finished the book. After I started the book I found myself in a conversation that went like this:

Friend 1: I don't like the way it ended.
Friend 2: I think it ended the way that it had to.

Not much said here but this tidbit...it HAUNTED ME. All through the book I was going back and forth. Analyzing and then reanalyzing. What do I want to happen? What do I not want to happen? What do I think is the only thing that CAN happen? I got to page 80 and realized I had to do something I never do in works of fiction. I wrote in the book. I wrote all over this thing. I listed my guesses on the very last page and placed hateful comments and smiley faces throughout.

So now, I am going to give you a glimpse into my mind and share with you some of those comments.

On the Blue Book plant: Awwe, memories.
Maybe that's the point, her intention.
Yeah! HA! no...
I'm over this disposable phone. Just tell us who it is already or stop ringing.
WTF! I want to punch this book in the face. When did he become okay with being suspicious?
On page 193 "Hey, Nick": Just got a flash of Double Jeopardy when she "comes back from the dead" his name was Nick too right?
Shit! Is Boney on to Amy?
Why is she making us hate her now?
I hear that!
On page 338 "Something bad was going to happen. My wife was being clever again." :)
Amy and Nick both do that, maybe they were meant for each other after all.
That's what I was thinking!
On page 399 "Nick and me (the correct grammar): This actually makes me happy. She can point it out and it's not the author being annoying because it is Amy and it fits.

And all of my speculation on the back cover:

At page 110: He hired hit man, she found out and set him up. He thinks he murdered her but she is framing him.
Page 136: She is pregnant. (while I was correct...sort of, the reason I guessed it was because the cops kept asking about her still being a size 2 which was actually about the panties hinting at cheating)
Page 341: Is Amy going to say Desi kidnapped her? (BAM!)
Page 372: I think the only ending I'll hate is if it all goes back to normal and all is forgiven between them.
Page 394: Now I don't know what ending I'd be happy with. Nothing sounds like a good way to go. Maybe Amy getting found out.
End:
Dude! I like the end, as of right now. Right before the last entries for Nick and Amy I was...unsettled/irritated/bored. After Nick I was okay because it was pathetic but almost closure in a sick way. Then I read Amy and I was glad it ended with an uncertain psycho comment. It seems more...real? It just seems to fit.

I love that inscription, how cute!

I think this book is one that lends itself to writing and rewriting as you read. You know it's twisty, so it's fun to try and figure out what the twists might be. I know that I didn't figure any of them out ahead of time.

Oh, that inscription is so sad! Mom didn't love the book enough to keep it! (I get sad when I buy used books with inscriptions in them.)

That's what my husband said too but I like finding books with inscriptions. It looked like it was read and I understand that not everyone hoards books like I do but I get where you guys are coming from. I try not to think about it too much or I'll probably feel bad. It has a good home now. ;)

Yeah it was definitely a book that twisted all about and still managed to not make me annoyed with the red herrings.