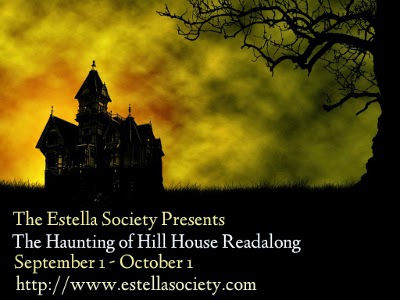 The Haunting of Hill House
by Shirley Jackson

Let me start with a disclaimer about how big a chicken I am...it's shameful. I don't know how I can claim Halloween as my favorite holiday when I can't watch actual scary movies (and haven't been able to since freshman year of college when I saw The Ring followed by Texas Chainsaw Massacre in the theatre and swore them off for good). My "scary" Halloween movie is Scream....classic! Why am I telling you all this except to air out my Halloween theme shame? Well, I was too chicken to read this book after dark...but I would catch-up on Walking Dead episodes...yeah, that makes sense... In my defense, my husband works at night so I am all alone with my crazy ass cat at night and it's not the murderers of the world that freak me out but the scary ghost stories.

Surprisingly, I would have been able to read this book at night if I had only known. It didn't turn out to be the scary story that I thought it would. The end especially was more sad than scary. All the moments that would have been more scary didn't carry as much punch as I was expecting. The moments seemed to speed by and then were followed by jokes or drama. It wasn't bad, it just wasn't what I was expecting. I actually really enjoyed the way the suspense was more in the build up than the actual event.

The story had such a wonderful way of hinting at the eerie without actually having anything freaky happen at that moment.

[...] watching something unseen move slowly across the bright green hill, chilling the sunlight and the dancing little brook. "What is it?" Eleanor said in a breath, and Theodora put a strong hand on her wrist. 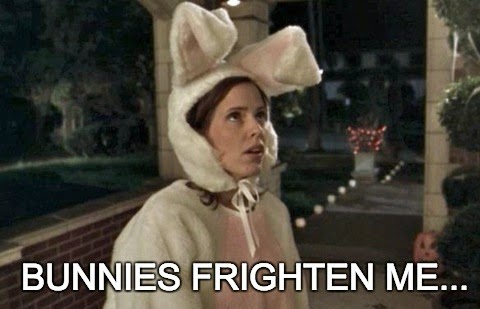 I mean for the length of the book (174 pages) the number of pages it took for something to actually happen with any sort of substance was surprisingly long. I was expecting shaking and footsteps and apparitions by page ten. While that didn't happen, there was a haze of eeriness that clung to that pages and kept me on edge at every questionable step around an unknown corner.

With a lack of any "real" events, the tension built and I became more and more suspicious of the actions of certain characters. As Eleanor slowly lost her mind I thought I was losing my own. What was happening to everyone and why were they treating her like she was the self-centered one?

I loved when Dr. Montague's wife arrives. I was reading it while it was getting dark outside and I was wanting to put the book down for the night but I just couldn't bring myself to do it. She has such a clear voice and she was able to make the creep status funny in a way that I really enjoyed. I think I will have to read this again next year and see what else I can take from it now that I know what to expect.

I was surprised too by how slowly the tension built in the book. I thought it was great how it was all achieved without any big "gimmicks"... who knew that a cold spot could be so eerie?

Agreed. I love that the book is more tension and slow, creeping terror than actual horror. It makes the actual manifestations a little bit scarier, at least in my opinion. Combine that with not knowing if you can really trust Eleanor's perspective, and it makes for a great, suspenseful read.

The whole book really was a slow build, not the horror I was expecting at all - probably a good thing because I am a chicken, too!

I'll definitely be rereading this one!

I was surprised how long it took for anything spooky to happen, but I think that that made it that much more eerie. It was interesting to see the tension build before seeing writing on the walls and poltergeist antics.

Like you, I really liked how this book got inside Eleanor's head -- that was the scariest part. I also liked Mrs. Montague. Well, I didn't like her but she was such an interesting contrast to her husband. You sort of hate her but then you think, why isn't he doing more? Glad you enjoyed the book!